CrossFit Siam Who we are and what we can do for you!

CrossFit Siam Who we are and what we can do for you!

We have no room for egos in our classes, and while everyone is working on their own to reach their goals, you will find that everyone is incredibly supportive of the “group”.

Our brand new, state of the art training facility opened in December 2020 with every aspect of our members’ needs considered. We have spacious changing and showering areas, a swimming pool along with a sauna and ice pool to aid recovery.

We are currently offering two CrossFit classes each day, which are scheduled in the morning and evening. We follow the latest scientific training methods, which means that our classes are 90 minutes in duration. It allows our members to complete a full warm-up while emphasising correct technique and form during the class. By limiting our class sizes to just 15 members, we can focus on each individuals’ needs.

We are committed to building core strength and help you to meet your fitness goals. Regardless of if you want to build muscle mass, increase toning or reduce body weight, our coaches can help you. We can help athletes of all abilities ranging from beginners to professionals. You will find our classes’ focus is about building a team and community spirit; or as we call it, the Siam Team! 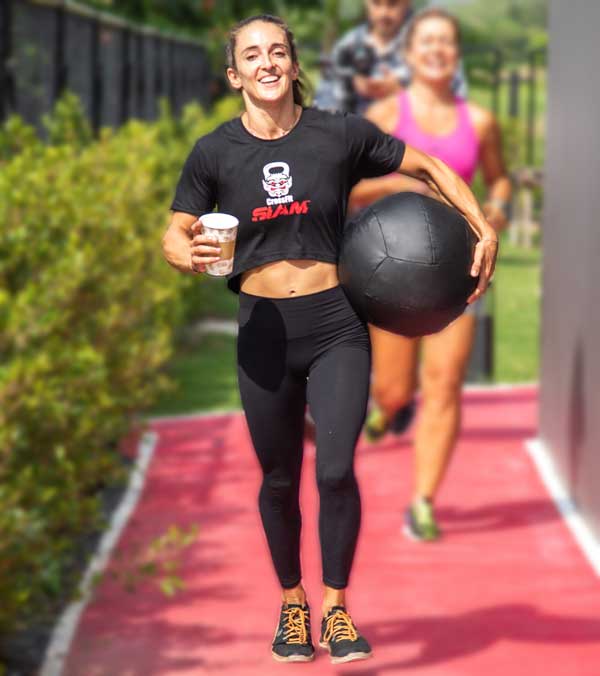 My name is Nathalie. I have started my journey into sport at pretty young age. Following my sister into the dojo, I became several times Belgian national Judo champion and travelled the world competing. Being disciplined with food, training and a certain lifestyle from a young age, forged habits and work ethics. My moto would be ‘nothing comes easy.
You have to work hard for it. But never without a pinch of fun!’
I discovered CrossFit in 2014. After several injuries/surgeries I ended my Judo career and was eager to find something new that would passionate me. I did my first CrossFit class, I remember it being one of the benchmark wod’s Cindy: 5 pull ups, 10 push ups and 15 air squats. We had to do it in pairs. My partner, being a male, was like: ‘don’t worry, I’ll do the pull ups’. He never said anything like this after that workout And I was sold to CrossFit. Having so much to learn, the movements, the skills, the strength, the cardio… A never ending story.
Working at CrossFit Siam and having the opportunity to run the classes how I see the best evolution for the members, is the best reward. Being able to work with such an amazing bunch of people:
people that want to get fitter, stronger, better, for their every day life, to compete or fighters that want to get better physically to become even better fighters.
My main goal as a coach is making people fall in love into sports, CrossFit and themselves, make them better every day. Because we all are a work in progress.

Here are the best coaches. You won’t be embarrassed by your first participation. Nathalie will teach you all the techniques of Crossfit. And the friendliest friends

Super friendly, encouraging and fun environment with people of many nationalities. Great programming by coach Nathalie who always looks after each and every one of us.

Such an amazing facility Friendly helpful staff - fantastic coaching Lovely members Really new clean facility with a pool, saunas and an ice bath ! Highly recommended to anyone in the area

New and clean facility. (New equipments, ice pool, sauna etc.) Helpful & positive staff. Great community. They are welcome any levels. Coach Natalie is the best, focus on techniques and attention to everyone like a pt. If you wanna learn skills and upgrade, she is the one!!! I am highly recommended SIAM CROSSFIT to everyone. Go there and “Get It Done”